Great post by David Meerman Scott, “Top Ten Tips for Incredibly Successful Public Speaking.”  Speaking in front of an audience is not easy, even if you are “a natural.”  It is a craft, and these tips will help sharpen your skills.

From my own experience, and some training I’ve picked up along the way, these are very good tips.  Even if they won’t turn you into an “Incredibly Successful Public Speaker” overnight, you should consider them seriously if you find yourself in front of an audience of any size.

As David says “Sadly, most speeches I see are not very good. Some are downright terrible.”  None of us want to end up in this category, so we should do well to follow these tips:

Don’t Use PowerPoint as a Teleprompter

I’ve written about this as has Guy Kawasaki, Bill Joos and many others.

This is über important.  Again, others have written about it at length, but it can’t be emphasized enough: if you want to have a chance that people may reference your talk, tell it as a story.  They are easier to remember and people might repeat them.

Be Aware of Body Language

This is a biggie and probably the one most often ignored.

I was once worked for a gentleman who really needed this advice.

I had just been promoted and my boss wanted to celebrate it.  He organized a big all-hands meeting, with lots of food and drinks.  So far, so good.

At the appropriate time, he gave a short presentation and then he announced my promotion in front of my team, of almost 200 people.

Afterwards, people came up to me, confused, essentially asking, “how come he promoted you if he doesn’t like you, was he forced to do it?” I knew exactly why they were asking that.

The problem was that as he said the nice words, he was looking down at the floor, with his hands stuffed in his back pockets and his voice was, well, lifeless.

As he was saying how excited he was to announce my promotion, he didn’t sound or look excited. When he said how happy he was for me, he was looking down and he even turned away from me at that very moment.  You can see why people’s thought that he didn’t mean what he was saying.  He looked uncomfortable.  And he was.  But not because of what he was saying but rather, he was uncomfortable speaking in front of that size audience.

As David says, if there’s a mismatch between your words and your body language, the latter will win out and that’s the impression you’re going to leave with your audience.

If you want to communicate that you are “concerned,” look and sound concerned. Lower your tone of voice and, for Pete’s sake, don’t smile.

If you are “excited,” look and sound excited.  Speak in a higher pitch, a bit louder and move your hands and your body around.

In summary, be prepared, know your talk, tell stories and look the part.  Remembering that has helped me stay out of the “downright terrible” presenters rank. 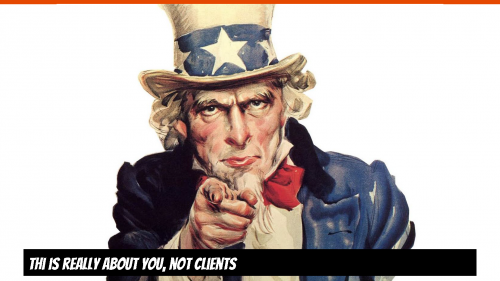 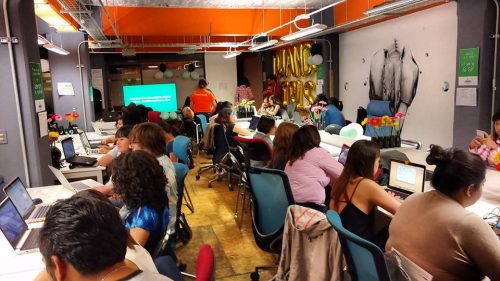