How a Cup of Coffee Changed My Life 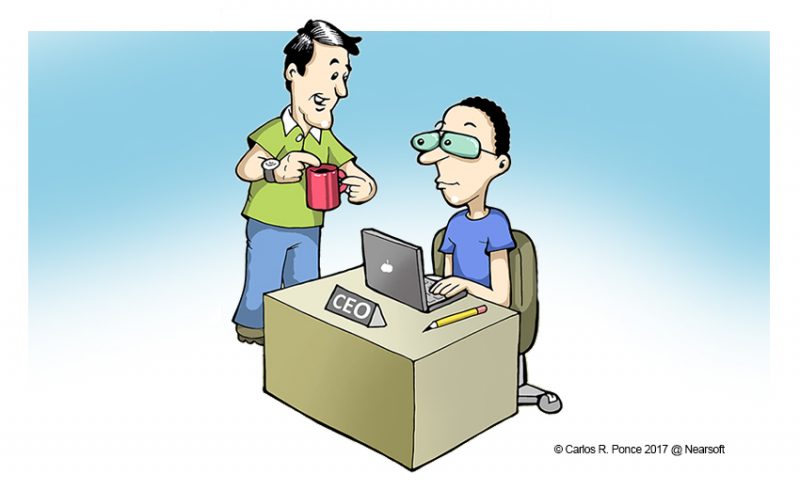 I would have never imagined that my inclination towards coffee could bring about a shift of paradigms in my professional life, and then some.

I started to work at Nearsoft back in Sep 2010 as part of their inside sales team. By then, I had a broad gamut of professional experiences, over almost two decades.  I was pretty sure that I knew everything there was to know about my line of work, and about my own self.  I should have known better.

Unbeknownst to me, I was starting a whole new chapter in my life.  For younger folks (I was 44 then) was perhaps a very cool job; for me, it progressively became a school for life.

This “old” dog learned quite a few new tricks!

A couple days after I started working at the company, I was about to meet with Roberto Martinez, the CEO, a young man in his thirties, to discuss some job-related stuff.  Roberto has never ceased to amaze me for his high level of human quality and non-pretentiousness.

As he sat there in the meeting room, I am pretty sure he wasn’t even aware that he was about to teach me one of many lessons I’ve learned at Nearsoft.  Its impact would morph my perception of what and who I am, and what I could become, not only professionally, but in pretty much every other aspect that defines me.

Cup of coffee in hand, I headed towards the meeting room.  Roberto looked towards me, and I asked, “may I come in?”  According to my thinking then for a traditional work setting, he was the authority figure and I was the new “worker” that was taking up his precious time.  I expected something like, ” … yes, of course.”

Contrary to my prediction, Roberto responded, to my surprise, in the least conventional way possible, “… I don’t know, can you?”

I felt the (positive) cultural shock in a very physical way, something like a tingling.

After digesting what I had just heard, thoughts were twirling around my head, probably bouncing against the conventional paradigm that we usually drag along throughout the course of our lives.

Roberto’s response was reminiscent of a gentle “whipping,” the way a Zen master does with his pupils.

His response was far from conventional.  It was indeed a creative and rich response for me and it became a catalyzer.  It bookmarked the beginning of discoveries about my own capacity in many areas of my life, professionally and personally.

A cup of coffee in my hand helped me discover what empowerment truly was. This has made it easier for me to figure out what I really want to do.  It has cleared my vision to create new opportunities for myself, regardless of who I am surrounded by, or the prevailing circumstances.

At Nearsoft, I have had many fine moments of fun and personal growth, self-learning, and friendships.  And I am confident that whatever comes next, it will be great, it will be good, and, most importantly, it will be on my own terms.

And if someone ever asks me, “can you achieve what you’ve set your sights on?,” most likely, my response will be, “I am pretty sure I can.  And, can you?”