Exploring Unpaved Roads (or How to Dig without a Shovel)

I couldn’t imagine it back in 2008 when I joined Nearsoft that I would end up “digging mines.” It has been a heck of a journey and I’ve learned a ton of stuff that I never expected to.

Little did I know I was in for a ride when I applied for a job at Nearsoft back in 2008. In my first team I had to carry out a fun mixture of tasks, ranging from system design to bug fixing and everything in between. This kept me jollying along for awhile while learning tons of cool new stuff. Sometimes I felt as if I were back in school, only without a report card. New Opportunity

Later, when a new career opportunity opened up at Nearsoft, I rolled up my sleeves and joined a new team. The new opportunity, let me experience what it was like to be in charge of a wide range of responsibilities, skills, and technologies. Even cooler, it gave me a chance to learn about the mining industry along with my team. 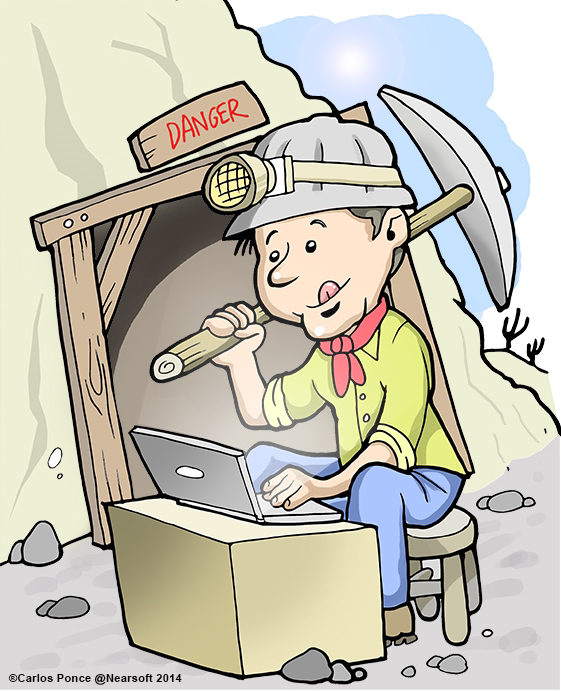 I plunged into something called the Dispatch Underground project. This system is used to control and monitor the movement of equipment in the mines. Because all this activity happens underground, there’s no access to GPS data. Instead, the mobile equipment uses onboard RFID readers to determine its location and elevation within the mine. The mine itself is geared with calibrated RFID tags.

The same scheme is used to control the digging units used in the constructions of underground roads. Using RFID makes it more accurate and safer to keep track of this huge equipment. This status, positions, and vital communication of the equipment is sent to the Dispatch Underground system and a Dispatcher can keep track of it all.

When our (Client-side) project manager was reassigned to a different location, the team took the opportunity to do things a bit differently. Previously, we were only executing the test cases. The new lead empowered the team to do more. As we became the owners of a Story, we got to also analyze and determine who was going to develop, automate, and be a leader of each Story.

It was great teamwork!

Today I am responsible for analyzing requirements, identifying scenarios, designing test cases, executing manual tests, coordinating efforts with the development team, supervising automation tasks for every Sprint. I work together with the Product Owner, the Scrum Master, and a multicultural distributed team in Canada, Russia, Ukraine, United States, and Mexico.

What I Have Learned

I learned to use a bunch of new technologies, like MS TFS (Team Foundation Server), MS Test Manager, MS Visual Studio, VMWare, RFID Simulator, MS SQL Server, and Camstudio. It has been fascinating to learn about things I would have never imagined I would be dealing with.

I encourage you to not be afraid to explore the many “dirt roads” that you might encounter along your career. I am convinced that the place we visualize ourselves to be in the future is not necessarily where we’ll end up, and this is not a bad thing. As long as you keep learning and enjoying what you do.